We have already had the opportunity to discuss the projects of the self-taught 3D artist Nicolas Brunet: its Christmas project in Alsace or Commander Kuro, inspired by the Star Wars universe.

We offer you today to dive into the work of this artist through an interview. The opportunity to return to his career and his recent projects.

Hello Nicolas, and thank you for accepting this interview. To start, can you introduce yourself in a few lines?

Hi, I’m a self-taught computer graphics artist for over 15 years, touching a bit of everything in the 3D world and VFX but recently I got interested in the creation of animated short films.

What are your skills?

After testing various processes and areas over the years, modelling, texturing and rendering are my main specialities.

What tools do you use the most and why?

3ds Max, Mental Ray and true for all that is pure 3D creation. Max, because it is the software with which I began when I started 3D, at the time on version 2.5 there was  no skinning modifier. We made a long way together, the software became my Swiss knife.
Matchmover 2014 for matchmoving, video based mocap and 3D object tracking.
Allegorithmic suite recently joined my tools, it was about time! I left the manual paint process of chips and dirt on some of my models for that new fast and very effective procedural workflow
I also use Agisoft Photoscan a lot but more to get texture informations (displacement, normals, etc) rather than getting a 3D scanned model to be use in production. 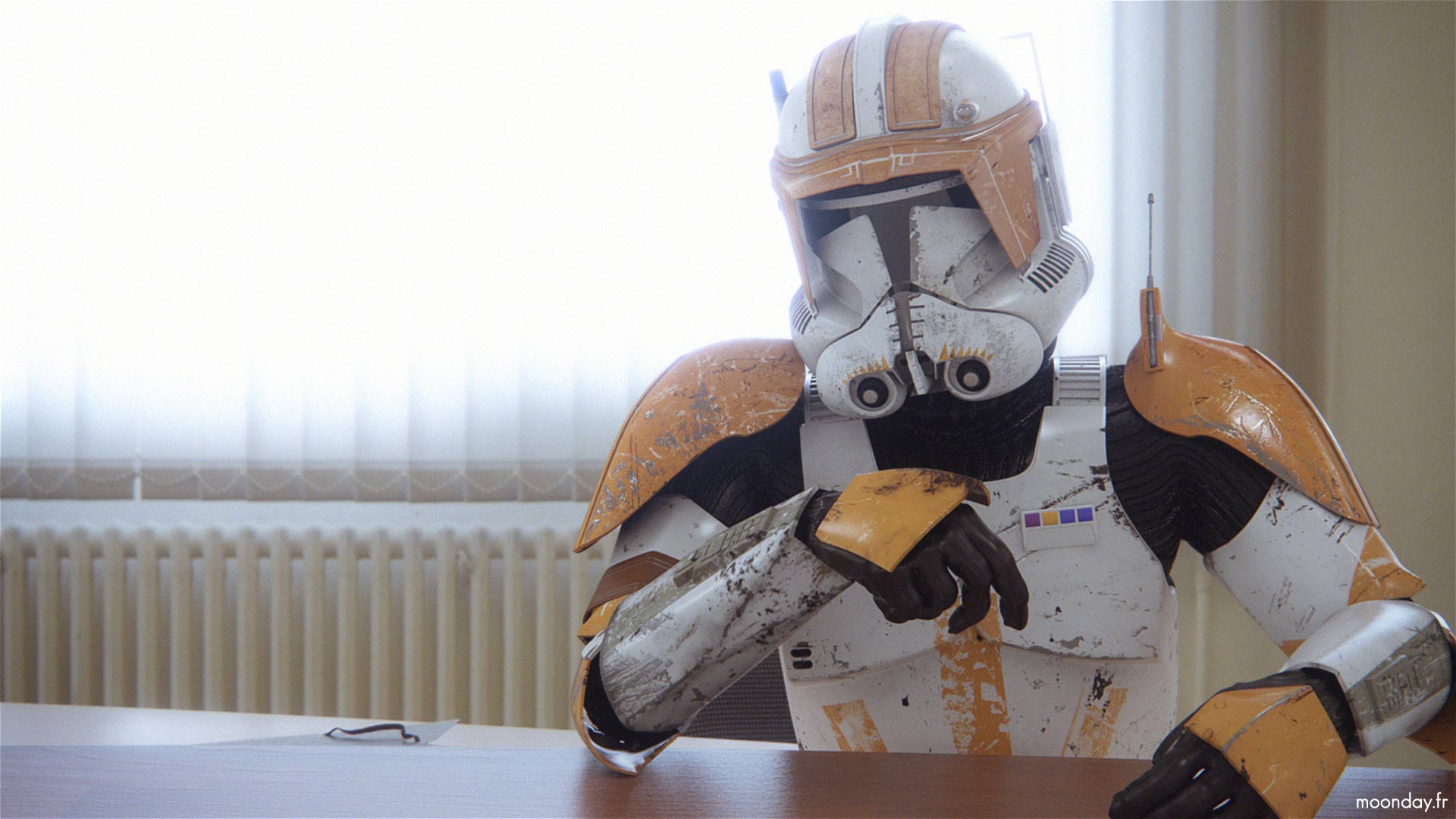 When I was 16, I could get my hands on a computer, after creating some drawings, the hardcore way, using the mouse, I did invest in a Wacom pen tablet to finally apply my paper drawing knowledge on computer.
Around 1996/97 I discovered a TV series called “Movie magic”, I’ve directly become a fan of the show. When Jurassic Park was released on theatre then Jumanji and a few years ago Star Wars Episode 1, I knew I wanted to do the same, on the digital aspect, this is how I become interested in 3D.
I must admit I also tasted other animation path, like stop motion, but my lazy side had the last word when I discovered 3D animations could be managed in less time and effort.

You are self-taught, why choose this path rather than a traditional school?

Due to financial reasons and also, apart from English and drawing, my grade level was catastrophic, I haven’t even managed to integrate an applied art high school.

What are for you the benefits of this approach over traditional ways?

The main benefit when you chose that way is you’ll never wait on other people to get the answer you’re looking for. You’re so motivated that you’ll hunt knowledge by your own. It’s a dangerous road and you get hurt a lot because nobody can help or be your guide (my experience), it develops your self-confidence a lot. You learn at your own pace, it’s like learning from failure, especially in 3D, you need a very strong motivation to choose this path.
So when a new software or method appears, we have a direct interest into it without trying to find an on-line training videos on the internet.

Let’s go back to some of your creations, including Christmas in Alsace: can you introduce us the project?

Christmas in Alsace is an adventure which spreads over several years. This is a series of short promotional film inviting viewers to celebrate the end of year festivities in Alsace.

Everything started in 2011 when the Facebook page of Alsace (where I come from) launched a video competition on the theme “direct you vision of the Alsatian Christmas”. As usual I discovered the existence of the competition shortly before the end. Given the price offered I started in making a small video explaining the origin of Bredeles, small Alsatian biscuits, a blend of live action and 3D The video won the heart beat price of the jury.
During 2012 I attended another video contest, this time in honour of Tim Burton when he came to Paris for the exhibition about his work, Tim himself was president of the jury of the competition. Once again, with only 8 days in front of me, my short film “Yo(r)u & I” won the contest and thus, I decided to forward the good news to my contact ” Christmas in Alsace “, then he offered me, to my surprise, to create a promotional short film for the end of the year around the Alsatian Christmas.
Total of three promotional films were created during this adventure.

What was the size of the team for the 3D part / Motion Graphics, and what constraints did you had (especially in terms of deadlines)?

A huge team of 1 person to manage all the visual and 3D part, that was unfortunately the weakness of my strategy on these films, thinking I could handle everything alone. Also I have absolutely no highly motivated contacts in the 3D world, communication is not part of my strongest skills.
Nevertheless, one can see the evolution of the quality over the 3 films, each having more production time than the previous one. To me, 2015 episode remains most successful.  Some friends gave a hand on 2 or 3 aspects of this episode, furniture modelling, a few  animation adjustments.
Production of 2012 episode lasted 2 months compared to episode 2015’s production that spread over more than 4 months which is always a good thing when you plan to use Mental Ray 😉 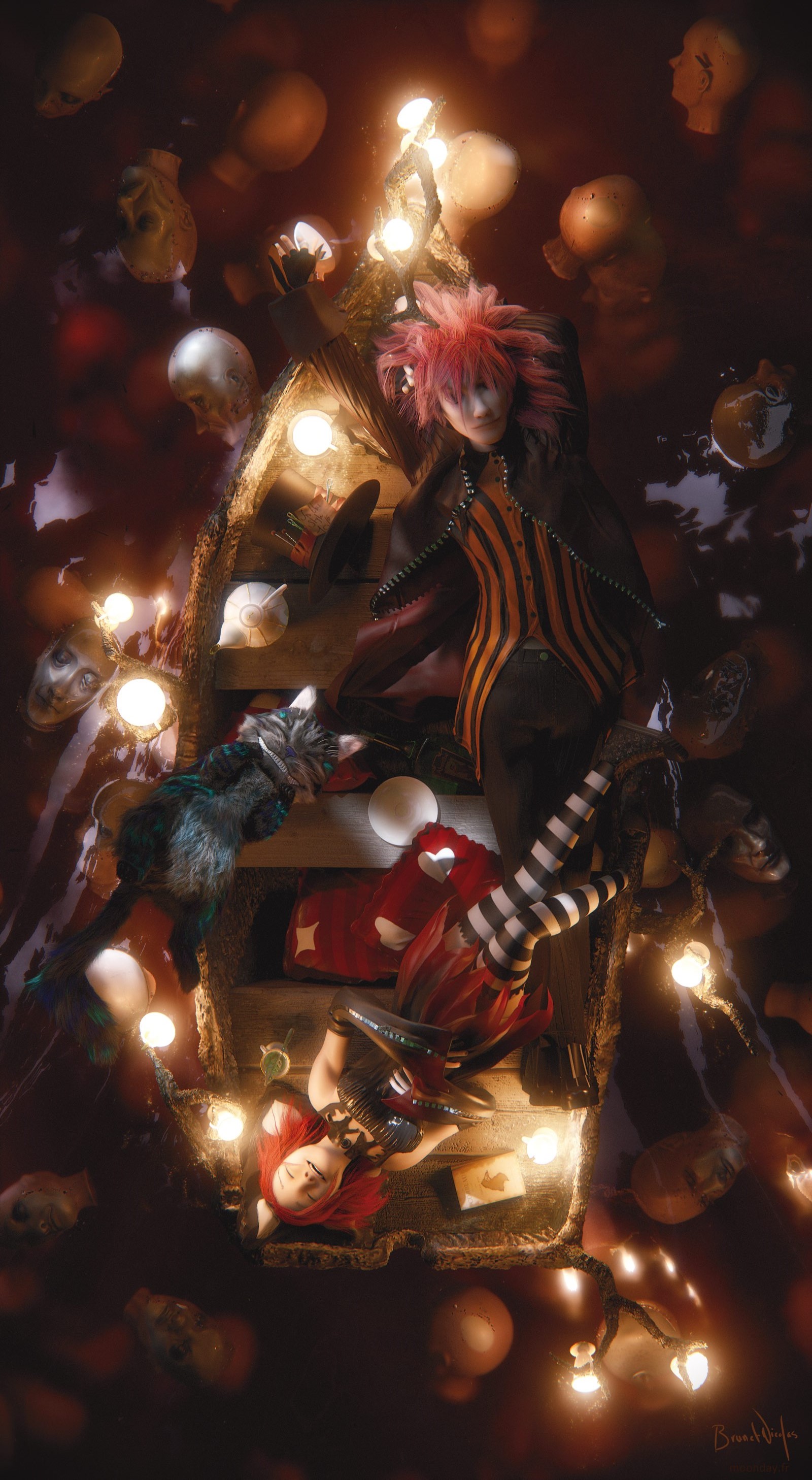 What have been the main technical and artistic challenges?

I’d say 3ds Max crashes but that’s a well known pleonasm.
Hair&Fur management was pretty tough at the beginning, that’s the reason why I moved on Hair Farm solution. There were still some bugs here and there, but overall I have now a functional workflow, everything is smoother than in 2012.

On the artistic side, 2012 and 2013 episodes heavily relied on real people 3D scan via Photoscan and ReconstructMe, which took me to a ride in the uncanny valley even without achieving good photorealism results. So I changed my mind on 2015’s episode toward a more cartoony/anime character style. It offered so many possibilities, I definitely had more freedom in the creation process, so I enjoyed a lot the design part. 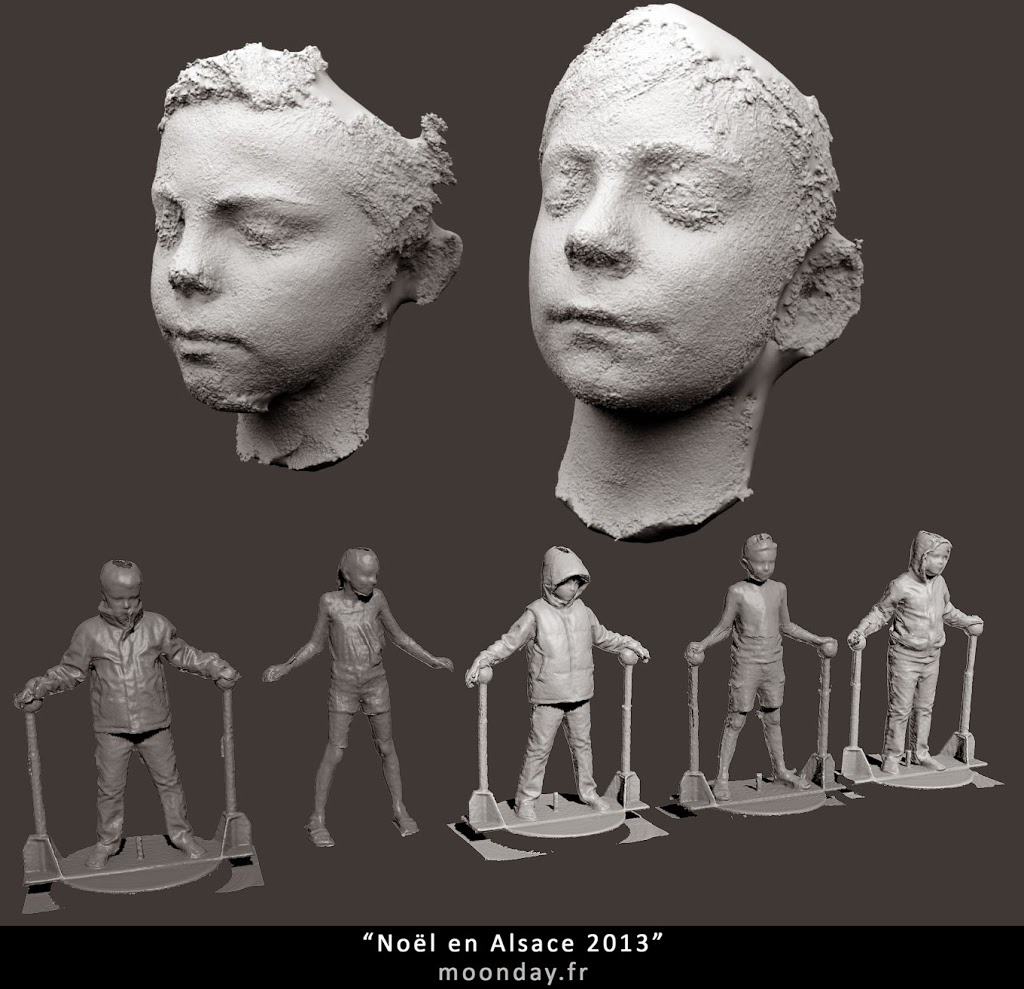 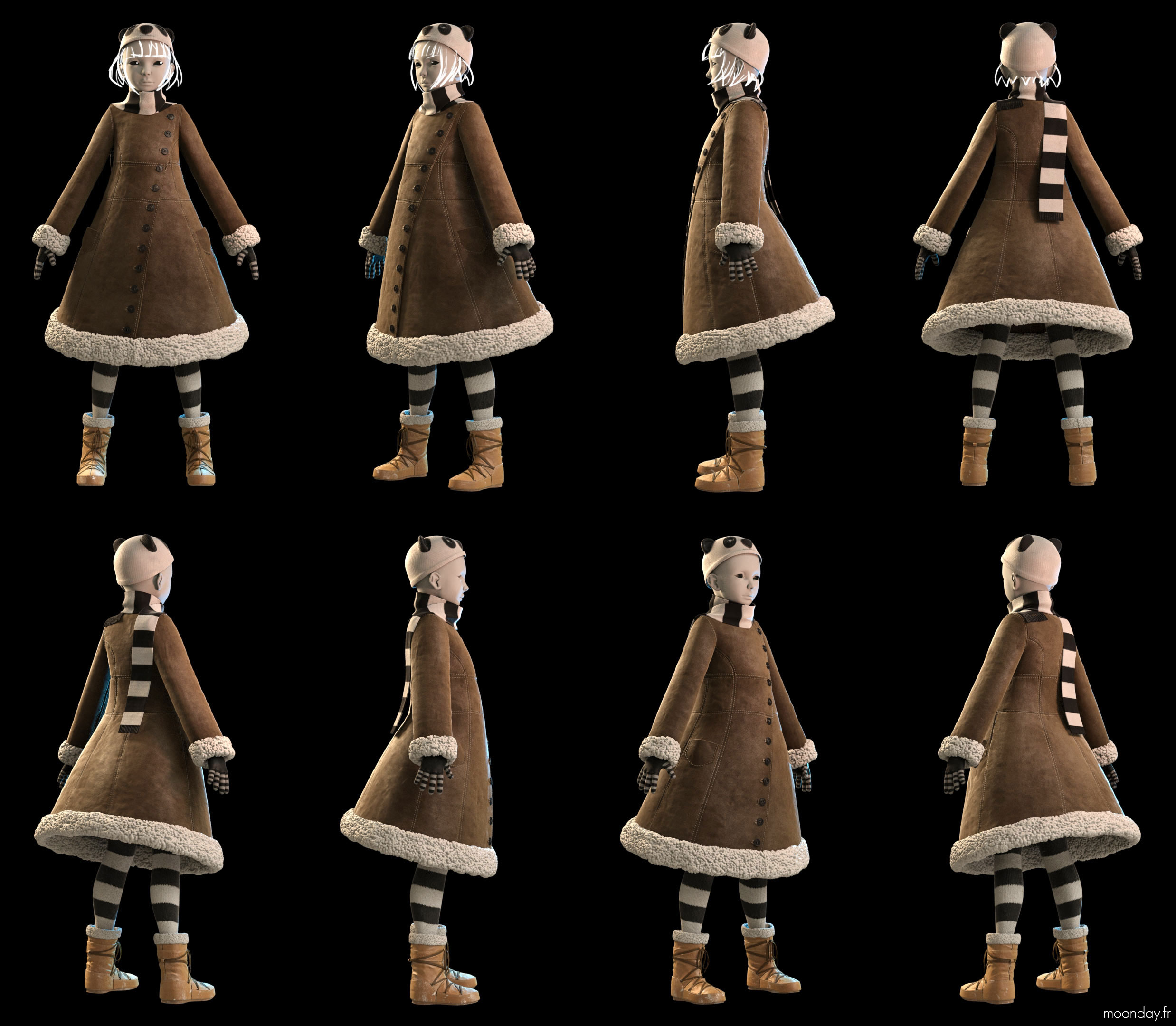 Between 2008 and 2013, you worked on the fan film Versus: The Way to Shadow, set in the Star Wars universe. You managed all of the VFX of the project. A few words about this experience and what it taught you?

“Never again”. This film was like a end year graduate project through which I learned several processes that were totally unknown to me at this time: matchmoving, Mental Ray rendering and especially the video based moction capture, a fairly new process in early 2000’s. For this, apprenticeship was long and tedious. With Nicolas Santini, director of the film, we had many shooting session before finding the correct trackers position on the actor and optimal positioning of cameras to get the best results once motion were tracked.
Self-learning I had on the film production created the foundations of my current knowledge in 3D and VFX.

What were the biggest challenges, and what advice would you have for people wishing to start also in the production of a fan film?

Get into a project when you don’t necessarily master all the aspects that you’d use, or worse, not knowing how to perform a particular task… Fortunately the internet and its countless tutorials were there (except for video based mocap, where’d have been the fun if everything was well explained? ;)) You have to be patient and meticulous, especially when working on the texturing of a Clone Trooper’s army. There must be around 13 variations of each armour elements x 7 (diffuse, glossy, bump, etc.), all this done manually, before the release of software such as Substance Designer or Ddo, unfortunately.
As said earlier, video based mocap has been the most complex part of the project and this until I have built a working custom rig that bring life in our clones.
I do not advise anyone to engage in the production of a fan film unless it’s a really original and parody idea because in the end, except in a demoreel, the film can’t be used like an original project, the license or the characters not being our property. However, diving in a fan art creation is more interesting, it takes less time than working on a short film project and the main aim is to improve your skills in one or more area like modelling or texturing. You focus on one thing: Art. 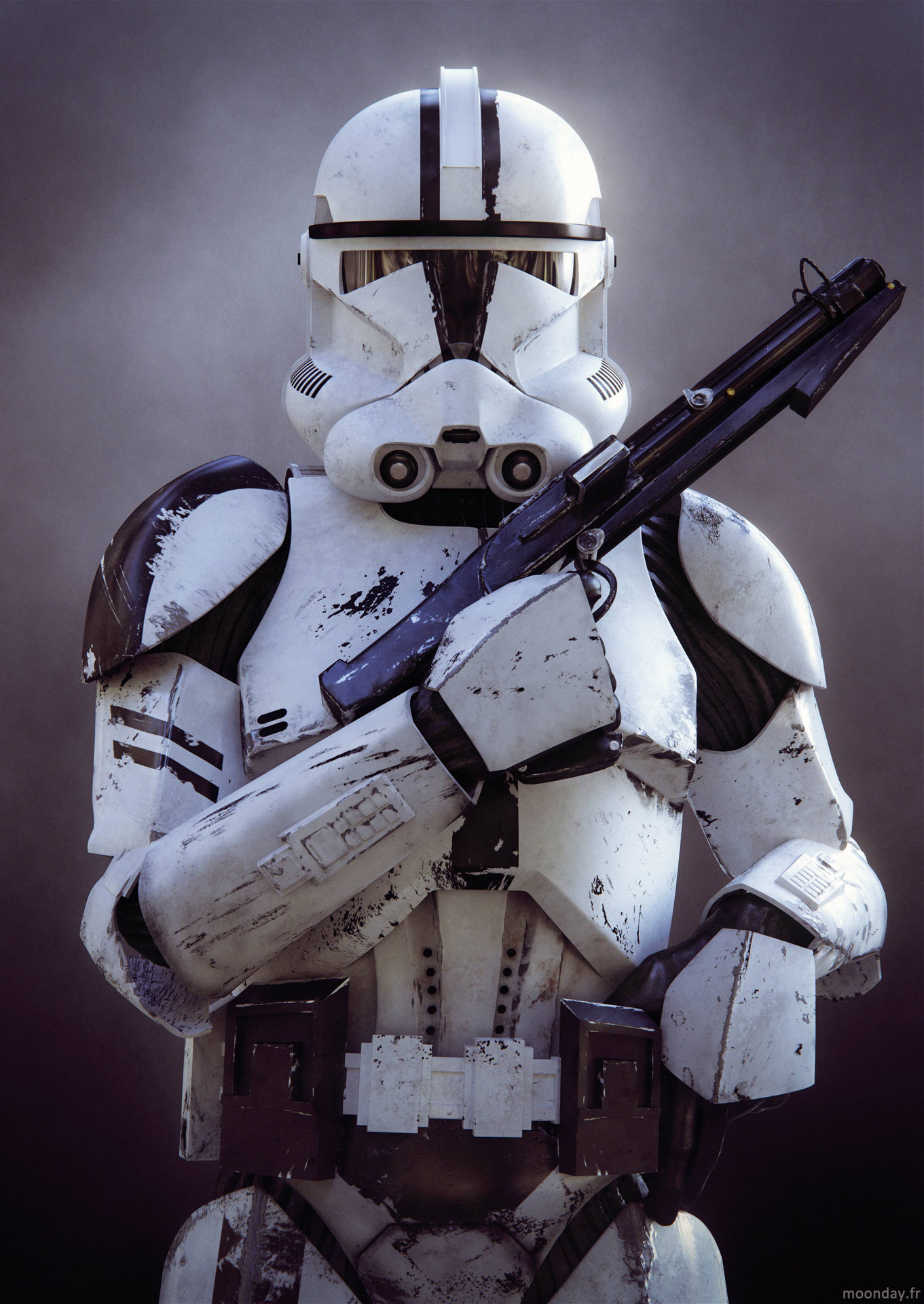 More recently, you have taken one of the characters created for the fan film, Commander Kuro, and you’ve drawn a picture that ended as a cover of 3D World Magazine. How did you rework the model and textures?

Indeed, after some exchange and publication in the past, 3d World Magazine asked for a cover and a “Next month” image based on Commander Kuro character I created for Versus: The Way to Shadow. The model was fairly clean, skinning issues were smoothed with some edit poly manipulation once the character has been posed. As for textures, even if the film was shot in SD, I went on a 2K resolution workflow, no quality problem on that side. However, I adjusted some textures once iRay rendered the different passes, erased some stretching here and there due to poor unwrapping and added some details in post using custom brushed and tile-able grunge map in overlay transfer mode. 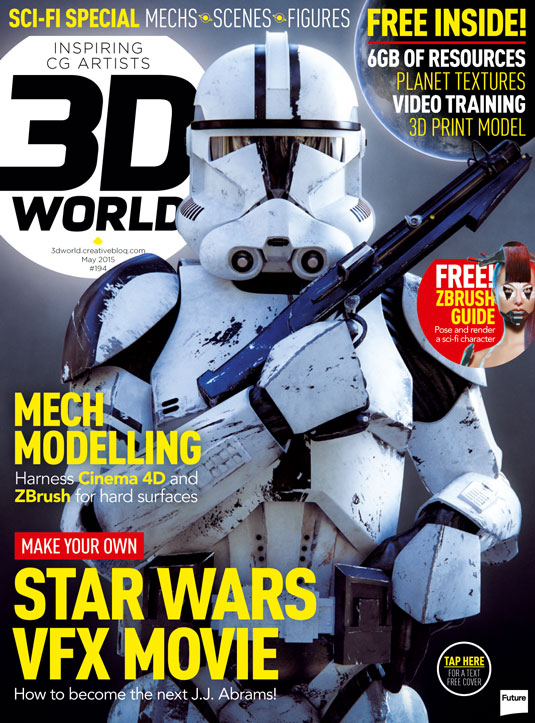 A few words about Unexpected Gifts, short on which you have mixed several techniques?

In 2014, I decided to have a little break after the colossal work done on Versus, therefore I jumped on a style I wanted to practice for a while: photorealism and also experiment facial motion capture and object tracking.
Unexpected Gifts, which is a test for a future short film, blends live action and CG elements in the 1st shot and then, the 2nd and 3rd shots are full CG. The reason why I went on full CG for the end of the video is that I couldn’t perform an acceptable matchmoving during live action shooting, quite ironic situation isn’t it, so the irrational person I am thought: “recreate everything in 3D? It sounds like a good idea.”
It was very fun.

(Want to know more about this project? Have a look at the Making Of)

What are your current projects?

Professional assignments to afford food, publishing some recently completed projects making of, one or two artworks which I must have posted progress on 3DVF forum and the preparation of an animated short, this time as a personal project. And also sleep.

What are your sources of inspiration for your projects?

I’ll try to resume. Mainly music, compositions from Yoko Kanno, Matthew Bellamy or Murray Gold. On the narrative and visual side: Makoto Shinkai and Miyazaki films. About colours and lighting, works from DOP such as Roger Deakins (Barton Fink, Fargo, The Big Lebowski), Chi Yang & Chor Keung Chan (Detective Dee), my travels and the awesome work from Visual Works studio that keep me inspired since I discovered Final Fantasy VIII introduction cinematic. Aside from this, my brain developed an abbility to give me lucid dreams in which I draw many ideas and concepts, who knows, maybe a side effects from living in a house full of Wifi signals linked to a huge consumption of Absinthe.

How do you see the continuation of your career?

I’d love to join a studio like Visual Works (Square Enix) or a Japanese animation film studio to observe and assimilate a maximum of techniques and workflows I’d use in my own animated films. This and have a look at VR.

Are you currently looking for a job?